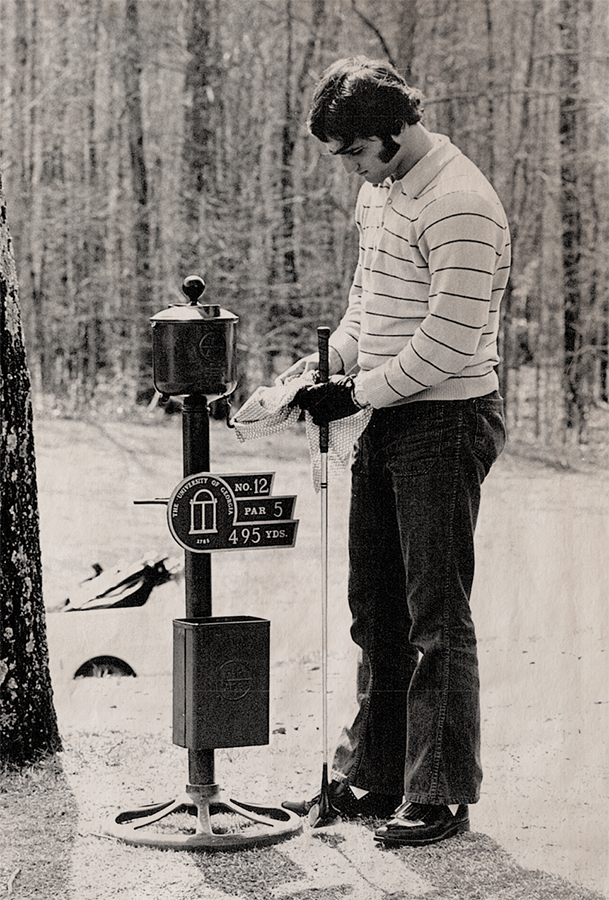 The first official mention of a potential University of Georgia Golf Course dates back to the summer of 1956 in a memo sent by Physical Education and Recreation Professor E. B. Smith to then-University President O.C. Aderhold. In the memo, Dr. Smith explains changes in the local golf course’s policies that negatively impacted students, faculty, and staff. Green fees were increasing to $1.03 per round and faculty members were no longer given access to the course. Dr. Smith also highlighted the educational and recreational advantages of the university operating its own golf course. Lifetime sports, as they were known at that time, were a big focus of the post-war United States to ensure a strong and healthy population for the future. Colleges and universities were also adopting recreational programs based on the increased national interest in outdoor activities and the known benefits of a sound mind and body. Dr. Smith deemed the golf course project “possible, feasible, and practical.” President Aderhold replied by suggesting that a golf committee be created to explore the possibility of a university golf course.

Dr. Smith worked on putting together the golf committee President Aderhold suggested and came up with the group listed below in the summer of 1957:

President Aderhold and Dr. John A. Dotson were involved from the UGA Executive Office.

The first meeting of the golf committee took place on September 16, 1957. A sub-committee was tasked with finding a land site capable of housing an 18-hole golf course. The sub-committee viewed their best option as property owned by Mr. Malcom Rowe located just east of what was then the University Horticulture farm. Mr. Rowe supported the construction of a golf course on his property with the potential for developing the land surrounding the golf course for residential purposes. In addition to land purchase options, a land exchange idea emerged because of the university-owned land that Mr. Rowe viewed as most desirable for his desired housing development. Mr. Rowe would give some of his property for the development of the golf course in exchange for the property he desired to develop. The feasibility of the land exchange idea needed to be validated, so Mr. Rowe suggested renowned golf course architect Robert Trent Jones Sr. be hired to develop plans for the property in question. 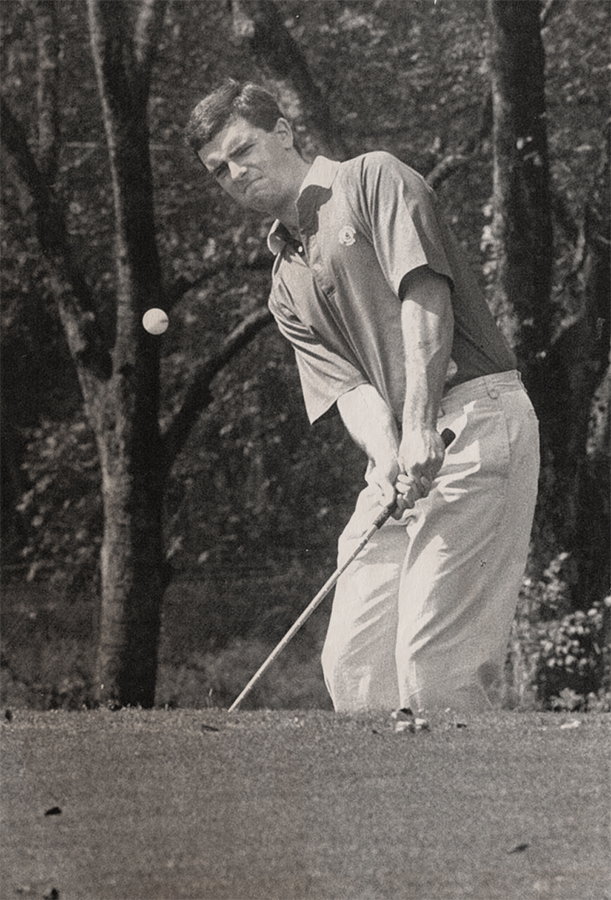 Mr. Jones was extremely well known in the golf world at the time the University Golf Course was being planned. By the end of his career, he was responsible for the design or re-design of more than 400 golf courses in the United States and 35 other countries. Mr. Jones’ prolific career led to the famous saying, “The sun never sets on a Robert Trent Jones golf course.” Jones was very successful in Georgia, having co-designed Peachtree Golf Club with legendary golfer Bobby Jones, as well as redesigning holes 11 and 16 at Augusta National Golf Club. While Jones was building the University Golf Course, he was also working on 36 holes at the Atlanta Athletic Club and the Stonemont Course at Stone Mountain Golf Club.

Mr. Jones made four trips to Athens and created multiple plans for the Rowe property, with Plan F being chosen by the golf committee as most suitable. Plan F clearly pointed out the area of the golf course and the proposed area for Mr. Rowe’s housing development. In September 1960, the committee recommended Plan F to President Aderhold. While all agreed that Plan F was best and that the university needed a golf course, no final decisions on the project were made at that time. There was still some discussion as to the best way for the University to obtain the necessary land from Mr. Rowe. While gaining momentum, the idea of a university golf course still lacked the support necessary to bring it to fruition.

The golf course project got a green light to proceed in September 1962. It should be noted that the University of Florida announced that its athletic association was purchasing Gainesville Golf & Country Club for the use of the university students, faculty, and staff. Whether or not that had anything to do with the University of Georgia’s decision to build a golf course is unknown, but prestige and keeping up with peer institutions were very important at the time, as they still are today. A land exchange with Mr. Rowe was finalized and internal resources were sought for the construction of the golf course to keep costs down. A gap in the written communications about the golf course between E.B. Smith and O.C. Aderhold must have taken place between 1963-1965, as the next golf course related document in President Aderhold’s personal records is an informational piece on the University of Georgia Recreation and Research Center. In this report, most of the suggestions from the Outdoor Education and Recreation statement from 1961 have been put into action. Intramural fields, a 20-acre lake, and the golf course were all under construction at this time. Project timelines were admittedly slow due to the use of in-house resources to save costs. From eyewitness accounts, the golf course project was also slow moving, but perhaps more so from very wet weather throughout construction than anything else.

Beginning in 1964, fifty cents from each student’s activity fees was being transferred into the intramural program to fund construction of the golf course. By the time the activity transfer fee for the golf course construction project ended, $87,081 had accumulated in an agency account. Per the December 30, 1968, letter from John Green, Vice President for Business and Finance, to then-University President Fred Davison, the financial cost of the new golf course was paid for using the following funds:

*Guests were required to be accompanied by a member of one of the above
listed classificiations.

The formal opening ceremony for the golf course took place at 3:30 p.m. on Friday, September 27, 1968. University President Fred Davison presided over the ceremony, with President Emeritus O.C. Aderhold, Athletic Director Joel Eaves, and Georgia Governor Carl Sanders in attendance. Brief remarks from those from Dr. Davison, Dr. Aderhold, and Governor Sanders were followed by Dr. Adrhold hitting the ceremonial first drive off the number one tee. After that, the other invited attendees enjoyed playing 9 holes on the new University Golf Course. 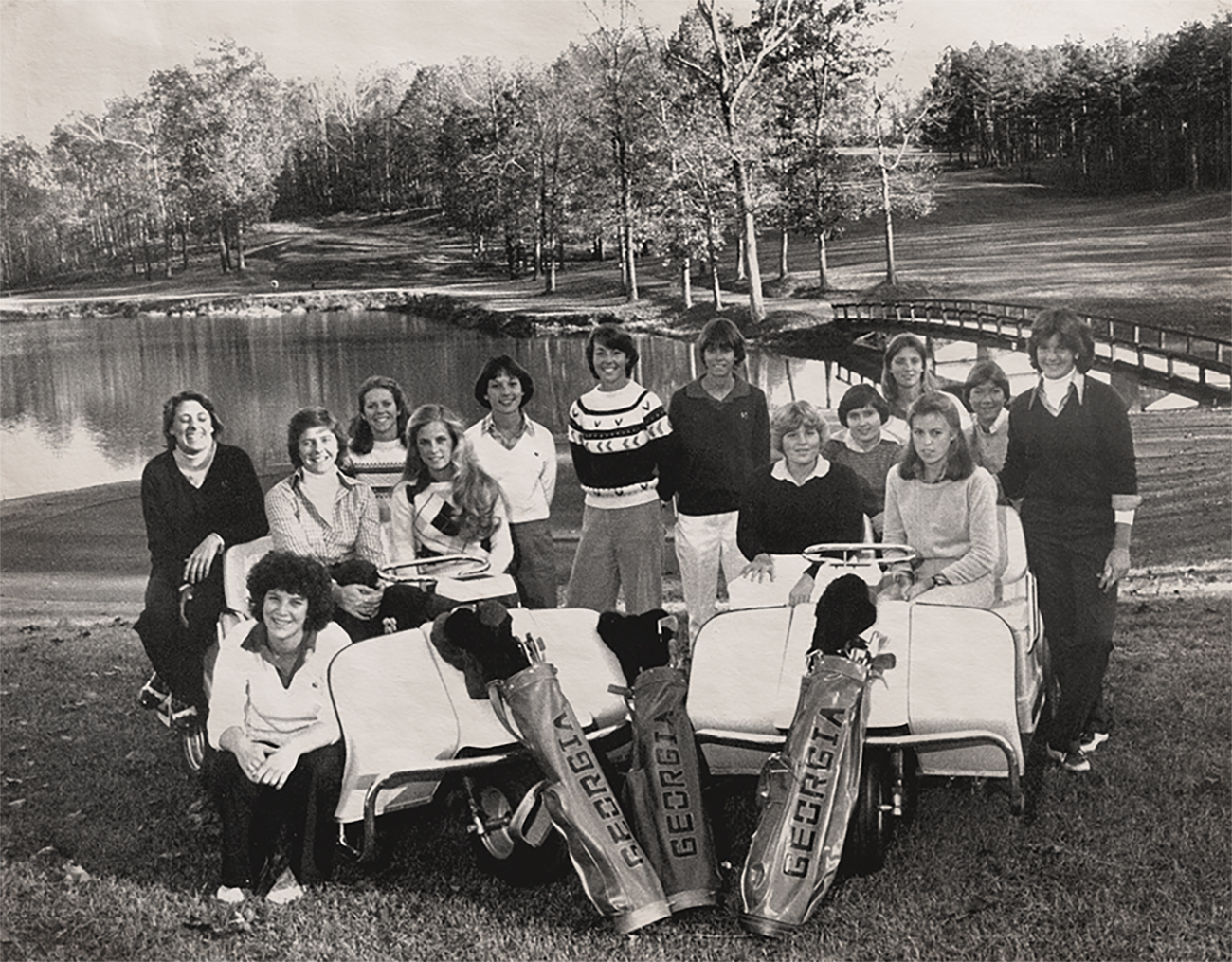 The University Golf Course quickly gained recognition as one of the finest campus courses in the United States and the university was eager to host competitive events on its new layout. In 1971, the golf course hosted the Division of Girls’ and Women’s Sports Intercollegiate Championship, which was the equivalent of today’s NCAA Women’s Golf Championship. Since then, the course has hosted the women’s national championship an additional 5 times: 1981 Association for Intercollegiate Athletics for Women Championship, and the 1983, 1984, 1993, and 2013 Women’s NCAA Championships. NCAA Regional and SEC Championships have all been played multiple times on the UGA Golf Course.

Additionally, the University of Georgia Golf Course annually hosts the Liz Murphey Collegiate Classic, one of the oldest women’s collegiate tournaments in the U.S. Named in honor of women’s intercollegiate sports pioneer and former Associate Athletic Director at UGA, Liz Murphey, the tournament attracts one of the best competitive fields of the spring season.

Throughout its history, the golf course has hosted numerous non-collegiate tournaments to promote the game and facility to an audience that now spans nationwide. Junior golf, amateur golf, and professional golf events are common at the UGA Golf Course. From 2010 to 2013 the Web.Com Tour called Athens home for the Stadion Classic at UGA. This particular tournament was the first PGA TOUR Co-Sponsored event organized, hosted, and operated by an institution of higher learning.

The University of Georgia Golf Program has a rich tradition and history of success, which dates back to the inception of the program in 1924. Since opening in 1968, the UGA Golf Course has played a significant role in that success as host course for both the men's and women's teams.

To enhance and improve the playing conditions of the UGA Golf Course, renovations were undertaken in 1990 and again in 2006. In 1990, golf course architect John LaFoy renovated the green complexes and added in some of the Robert Trent Jones, Sr. design features that were left out during the original construction. A modern irrigation system was also installed that greatly improved the condition of the course’s multiple varieties of grass.

In May 2006, Love Golf Design of St. Simons Island came in and renovated the green complexes and added 21 new tees to both lengthen and shorten the golf course to improve playability among all abilities of golfers. The new championship Bulldog Tees stretched the course to almost 7,300 yards and provided the best collegiate and professional golfers with a very stern test. The golf course reopened in December 2006 to rave reviews.